International Day for the Eradication of Poverty

International Day for the Eradication of Poverty

The observance of the International Day for the Eradication of Poverty can be traced back to 17 October 1987. On that day, over a hundred thousand people gathered at the Trocadéro in Paris, where the Universal Declaration of Human Rights was signed in 1948, to honour the victims of extreme poverty, violence and hunger. They proclaimed that poverty is a violation of human rights and affirmed the need to come together to ensure that these rights are respected. These convictions are inscribed in a commemorative stone unveiled on this day. Since then, people of all backgrounds, beliefs and social origins have gathered every year on October 17 th to renew their commitment and show their solidarity with the poor. Replicas of the commemorative stone have been unveiled around the world and serve as a gathering place to celebrate the Day. One such replica is located in the garden of United Nations Headquarters and is the site of the annual commemoration organized by the United Nations Secretariat in New York. 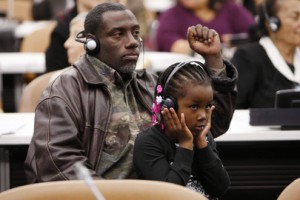 Through resolution 47/196 adopted on 22 December 1992, the General Assembly declared 17 October as the International Day for the Eradication of Poverty and invited all States to devote the Day to presenting and promoting, as appropriate in the national context, concrete activities with regard to the eradication of poverty and destitution. The resolution further invites intergovernmental and non-governmental organizations to assist States, at their request, in organizing national activities for the observance of the Day, and requests the Secretary-General to take, within existing resources, the measures necessary to ensure the success of the Day’s observance by the United Nations.

October 17th presents an opportunity to acknowledge the effort and struggle of people living in poverty, a chance for them to make their concerns heard, and a moment to recognize that poor people are the first ones to fight against poverty. Participation of the poor themselves has been at the center of the Day’s celebration since its very beginning. The commemoration of October 17 th also reflects the willingness of people living in poverty to use their expertise to contribute to the eradication of poverty.